There are three different people groups spoken of in the Book of Revelation:
Israel does not necessarily mean the same as “Jews.” Children of Abraham, included those adopted in are “Jews.” Jacob was referred to as “Israel” so Children of Israel are those who are biologically related to Jacob and settled the land called Israel.

After the sixth seal, before the trumpets are released, God addresses the “Children of Israel” in Chapter 7 of Revelation.

After this I saw four angels stationed at the four corners of the earth, firmly holding back the four winds of the earth so that no wind should blow on the earth or sea or upon any tree. (Revelation 7:1 AMPC)

The four winds are usually mentioned as “being released” in connection with a great judgment forming from God (Ezekiel 37:9; Daniel 7:2; Zechariah 2:6). Now the four winds are being firmly “held back.” There is a space of time when God will halt judgment: this is echoed in the beginning of the next chapter:

When He [the Lamb] broke open the seventh seal, there was silence for about half an hour in heaven. (Revelation 8:1 AMPC)

When there is a silence for half an hour, no judgments are coming forth from the Throne. If we continue reading, we see why it must be, what will happen on Earth during the silence in Heaven:

Then I saw a second angel coming up from the east (the rising of the sun) and carrying the seal of the living God. And with a loud voice he called out to the four angels who had been given authority and power to injure earth and sea, saying, “Harm neither the earth nor the sea nor the trees, until we have sealed the bond servants of our God upon their foreheads.” (Revelation 7:2-3 AMPC)

And I heard the number of them which were sealed: and there were sealed an hundred and forty and four thousand of all the tribes of the children of Israel. Of the tribe of Juda were sealed twelve thousand… (Revelation 7:4-5 AKJV)

The next several verses show us that 12,000 are chosen out of the twelve tribes or “children” of Israel: Judah, Reuben, Gad, Asher, Naphtali, Manasseh, Simeon, Levi, Issachar, Zebulun, Joseph, Benjamin. Two of the tribes are not mentioned: Dan and Ephraim. They were conquered by the Assyrians, and exiled, never to be mentioned again. God’s judgments are halted until 144,000 come into the Kingdom of God through the Lord. What a beautiful time that will be when our Jewish brethren say “blessed is he who comes in the name of the Lord.”

After this I beheld, and, see, a great multitude, which no man could number, of all nations, and kindreds, and people, and tongues, stood before the throne, and before the Lamb, clothed with white robes, and palms in their hands; And cried with a loud voice, saying, Salvation to our God which sits on the throne, and to the Lamb. (Revelation 7:9-10 AKJV)

“After this” means that the time has continued and then this group appears. Now we see a group of people appearing from every nation, people and tongue standing before the Lord clothed in white which is righteousness. These are more then the 144,000. It is a product of what is occurring with the 144,000. We know that because of what John asks who the are…

These are they which came out of great tribulation, and have washed their robes, and made them white in the blood of the Lamb... They shall hunger no more, neither thirst any more; neither shall the sun light on them, nor any heat. (Revelation 7:14 & 16 AKJV)

The fact that they were hungry, thirsty and had been damaged by the sun and heat, show that they were on earth during the trumpets; the second half of the Tribulation often referred to as “the Great Tribulation.” This can be clearly seen because after the 144,000 are mentioned again, after the following are revealed:

And I looked, and, see, a Lamb stood on the mount Sion, and with him an hundred forty and four thousand, having his Father's name written in their foreheads. These are they which follow the Lamb wherever he goes. (Revelation 14:1 & 4-5 AKJV)

The stamp on the forehead is not for Jesus or Jerusalem as we see elsewhere. These men are dedicated to God as His people;Hebrew by birth. This shows a brilliant organization. Sandwiched between the mentions of 144,000, God reveals a new prophecy and shows how the different group of people will be affected throughout Daniel’s week, as we have previously discussed. Then, when that week is over, we see a bit more about the 144,000.

And they sung as it were a new song before the throne, and before the four beasts, and the elders: and no man could learn that song but the hundred and forty and four thousand, which were redeemed from the earth. (Revelation 14:3 AKJV)

●     not defiled with women; for they are virgins
○     chaste men or “virgins” referring to being devout and devoted to God alone
●     follow the Lamb wherever He goes
○     remains close to Jesus
●     redeemed from among men, being the first fruits to God and to the Lamb
○     first fruits are given to God when you come into a new land, in this case, Heaven
●     in their mouth was found no guile: for they are without fault before the throne of God.
○     they are honest and righteous before God
(Revelation 14:4-5 AKJV)

These are the qualities of the 144,000 who receive the seal of God between the breaking of the sixth seal and the trumpets. This is what the Lord revealed to me, when I asked Him if they would all be men, as the scripture seems to indicate:

Priests in Israel were always male. According to many Hebrew traditional beliefs, men needed the ritual actions of priesthood in order to remain close to God and follow His ways. Women “have superior inherent spiritual wisdom,” known as binah. That makes them less dependent than men on the performance of timely religious practices to retain a strong spiritual connection to God. (www.jpost.com. Retrieved 2019-03-08)

Binah: “processed wisdom,” also known as deductive reasoning. It is davar mitoch davar—understanding one idea from another idea. While Chokhmah is intellect that does not emanate from the rational process (it is either inspired or taught), Binah is the rational process that is innate in the person which works to develop an idea fully. Classical Jewish texts state binah yeterah natun l'nashim ("an extra measure of binah was given to women").

The Torah describes the creation of woman with the verse, “And the L‑rd G‑d built the side that He had taken from man into a woman.”

The word that means “built,” vayiven, shares a root with the word binah, comprehension. This suggests that “an extra measure of binah, understanding, was given to a woman.”
Builders
By Sara Blau
Chabad.org

When G‑d wakes Adam from his sleep and brings the woman to him, he proclaims her isha and after she gives birth he proclaims her Chava… Hebrew name of each part of creation is composed of those letters used in its construction and reveals the essential nature of the thing itself, because the essence is bound up with the Hebrew letters with which it was formed. Significantly, only human beings are given two pairs of names.

The first name given to woman, isha, is related to the name given to man, ish. This reveals that a woman, like a man, must develop her spiritual and intellectual potential to the fullest. Other exegetes have pointed out that the difference between ish and isha is the use of a yud for ish and hey for isha. The hey is a more developed letter, and in fact, the yud represents that first burst of undirected intellectual energy or insight, whereas the hei represents the ability to develop that energy/insight in meaningful and practical ways.

This may explain why women could be judges (Deborah) and prophetesses (Miriam and Huldah) but were not priests. Women are not in any way less than men spiritually speaking.

The 144,000 are not all males. They are those who are devoted wholly unto Jesus. We must look to the New Testament to see why this is the correct interpretation of virgins:

For I am jealous over you with godly jealousy: for I have espoused you to one husband, that I may present you as a chaste virgin to Christ. (2 Corinthians 11:2 KJV)

These are Jewish believers who have not defiled themselves by submitting to another god - including but not limited to the Antichrist. This is why when the sealing of Israelites began it was “children of Abraham,” not only “sons.” (Revelation 7:4 AKJV)

The day I delivered this message, I received over 1,700 hits to my blog from Israel. As you can see, that is an unusually high amount of traffic! 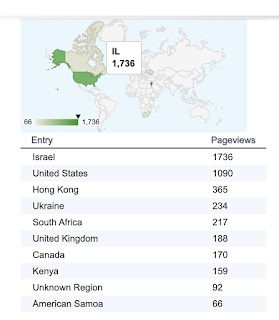 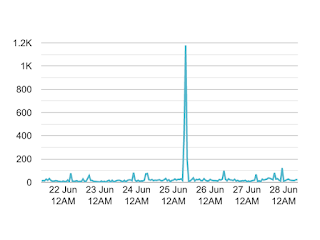 8. Is a Rapture (Catching Away) in the Bible?
VIDEO: https://youtu.be/_lXJGz55Z-Q
ARTICLE: http://www.toheavenandbackagain.com/2020/06/is-rapture-catching-away-in-bible.html
More Articles with messages from God can be found in: