The blood moon fell on the Hebrew feast of the Second Passover on Saturday May 14-15 2022. We have already discussed the significance of this eclipse in connection to a trio of eclipses in the article “Signs in the Heavens”.  However, in order to understand the complete meaning we must first learn about the Jewish holiday on which it falls as well as investigating the previous blood moons that occurred during the same festival.

…If any man of you or of your posterity shall be unclean by reason of touching a dead body or is far off on a journey, still he shall keep the Passover to the Lord. On the fourteenth day of the second month in the evening they shall keep it… (Numbers 9:10-11 AMPC)

If a Hebrew missed the Passover celebration because they were unclean or on a journey, they were commanded to keep the Passover, one month later. When Jesus came the first time, non-Hebrews could not celebrate Passover. At first, Jesus was only sent to Israel.

And, behold, a woman of Canaan came out of the same coasts, and cried to Him, saying, Have mercy on me, O Lord, You son of David; my daughter is grievously vexed with a devil. But He answered her not a word. And His disciples came and sought Him, saying, Send her away; for she cries after us. But He answered and said, I Am not sent but to the lost sheep of the house of Israel. (Matthew 15:22-24 AKJV)

The first coming of Jesus was for Israel, just as the first Passover could only be celebrated by the Jews. Everyone else at that time was “unclean,” and “dead” because they didn’t have a relationship with God. Gentiles, those not born Jewish, have now become clean, redeemed from sin, and are in right relationship with God because of the death of Jesus on the cross.

The two Passovers foreshadow how Jesus would fulfill prophecy about Himself.

And I will show wonders in the heavens and in the Earth, blood, and fire, and pillars of smoke. The sun shall be turned into darkness, and the moon into blood, before the great and terrible day of the LORD come. (Joel 2:30-31, Acts 2:19-20 AKJV)

A blood moon occurs when the moon in a total eclipse appears reddish in color as it is illuminated by sunlight, filtered, and refracted by the Earth's atmosphere causing it to have a reddish hue. When I began looking into the dates of blood moons and where they occurred when they were connected to a Second Passover, here is what I discovered. A blood moon is only connected to five Second Passover dates in the last 100 years. Each year this occurs, it is connected to essential events related to the end times. 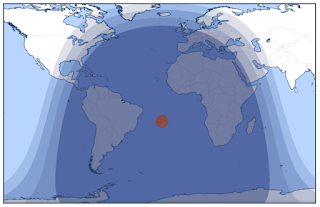 The lunar eclipse begins, and it is  visible throughout France. The League of Nations is established in Paris. The US doesn’t join the League.
The components in this organization will eventually become the United Nations (U.N.) This is the birth of the UN. This blood moon begins the morning the Second Passover meal is taken the night of the 14th. Only North & South America as well as the Pacific Ocean are affected by this eclipse.
This feast is to celebrate the night the angel of death passed over the houses of Israel but killed all the first born sons of Egypt. The date most frequently associated with the start of the Holocaust is January 30, 1933: This is when Adolf Hitler was appointed German chancellor, setting in motion what would become the Nazi genocide against the Jews.
A major turning point in Nazi policy toward Jews was on November 9 to November 10, 1938, in an incident known as “Kristallnacht,” Nazis in Germany torched synagogues, vandalized Jewish homes, schools and businesses and killed close to 100 Jews. In the aftermath of Kristallnacht, also called the “Night of Broken Glass,” some 30,000 Jewish men were arrested and sent to Nazi concentration camps.
In the coming years, many Israelites died because America sat idly by and didn’t enter the battle. The US only entered the war after the bombing of Pearl Harbor, in the South Pacific. 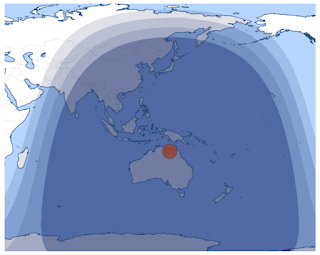 The area of effect for this eclipse begins by encompassing the Soviet Union (Russia), Japan, Pearl Harbor and Hawaii. Many events began in this year, the effect of some would only be seen three years later.

After this war, the League of Nations is disbanded and many of the components are moved into the United Nations which is established in San Francisco, California in North America. The League was a precursor to the UN.

The area of effect is centered around the Middle East and Israel. The US is completely excluded from this lunar eclipse. Hezbollah, which is a branch of Islam, is founded and later is supported by Syria.
America is completely unaffected by this eclipse. In the US, the first Internet domain name was registered (symbolics.com) and Microsoft launches Windows 1.0. We know that a Microsoft patent will be used to create the Mark of the Beast. A  microchip will be implanted into the hand to record and track data at the very least. 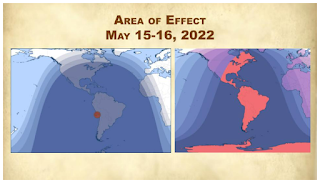 The area of effect is centered around eastern  North America. The Lord has told us that on September 13, 2022, the first seal of Revelation will be broken as the AntiChrist rides forward during the 77th session of the UN General Assembly. On the 19-20th, he will broker a peace treaty which is the seven-year agreement known as “Daniel’s Week” and the beginning of the Tribulation.
When we studied the Book of Revelation from Jesus’s point of view, we discovered that though we know when the Tribulation will begin, we don’t know the day or hour of His return. Every blood moon in the last 100 years points to what we learned when studying Revelation with the Lord:
This sign in the heavens confirms that this is indeed the year of the Tribulation. Another Holocaust is on the horizon. Like the Nazi organization, it may start out as something benign, but in the end, the entire world will be engulfed in calamity.
There was a symmetry in the way the blood moons were connected to the Second Passover dates.
The Mark of the Beast may begin in Israel, but eventually, it will encompass the entire world.

Also it causes all, both small and great, both rich and poor, both free and slave to be marked on the right hand or the forehead so that no one can buy or sell unless he has the mark, that is, the name of the beast or the number of its name. (Revelation 13:16-17 ESV)

Now is the time to draw close to the Lord. To accomplish this, we must be walking in God’s ways. The Lord is our protector and if we stay close to Him, we have nothing to fear. He has told us these things in advance so that we can prepare for what is coming.

And it shall come to pass that everyone who calls on the name of the LORD shall be saved. For in Mount Zion and in Jerusalem there shall be those who escape, as the LORD has said, and among the survivors shall be those whom the LORD calls. (Joel 2:32 ESV)

Learn more about what is coming and how the Lord will provide for His Bride in the free classes at the Courts of Heaven Academy.

Courts of Heaven
tab in the menu at the top.
FREE Books