At the end of July the Lord sent a dream showing two things:

When the waves break over barriers, it is a confirming sign. I sought Him and asked why San Francisco?

San means Saint, Francisco is Francis. The city was named after Saint Francis. Jesus appeared to Francis of Assisi in the 13th century and said, “Francis, Francis, go and repair My house which, as you can see, is falling into ruins.” Francis thought this meant he needed to repair the church where he was praying. Enthusiastic about the commission, Francis sold some cloth from his father's store to give the money to the priest for this purpose. The priest refused to accept the “ill-gotten gains” and Francis’ father took him to court because of theft of his possessions. For many years, Francis was destitute.

Our Heavenly Father is tired of us selling what belongs to Him. The worship industry is included in this coming judgment from the Courts of Heaven. Churches have been operating according to the ways of the world and now God is sending a correction.

This is a sign to confirm that the spirit that is not from Him had infiltrated churches. He expects us to turn our backs on churches that are selling what rightfully belongs to Him unless we want to be caught in the judgment coming from Heaven. A sign must be interpreted!

This prophecy has been fulfilled, but not in the way we thought it would be. The Gulf of Mexico had a historic event in August: two hurricanes were heading into the Gulf at the same time! Because this was not in the immediate San Francisco area in the state of California, I didn’t even look at these events until a few people messaged me about them. Once I began looking at the prophecy with fresh eyes, I was amazed by what God was saying!

This is a very important lesson. When God tells us what will happen, often He doesn’t give specifics. This is why much of Israel didn’t recognize Jesus as the Messiah though there were over a hundred prophecies about Him.

The Book of Revelation has many prophecies about our future. I expect many of them to be fulfilled in this lifetime. We must keep an open mind. They may not come to pass the way we think they will! Let’s look at what God said about the waves and San Francisco: 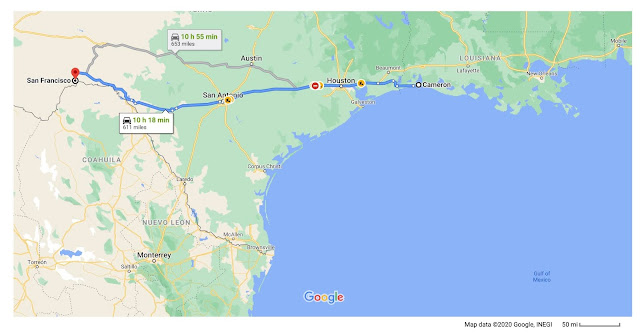 Cameron is south of both cities which hold the name San Francisco. Two major storms headed for the gulf of Mexico at the same time. An event like this has never happened in recorded history. Their approach was noted on the first day devout Hebrews began celebrating the Feast of Trumpets: August 21, 2020. Marco and Laura became the 6th and 7th named storms to hit the Continental US. The metaphorical meaning of these facts are:

Marco represents leaders of God church: men and women guiding the battle against the enemy. Laura is God’s perfection upon this earth which will usher in His victory. This is a record-breaking event of the earliest 7th storm in a season in recorded history. 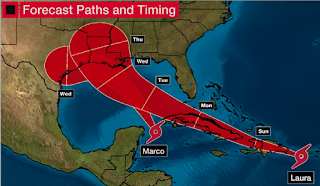 For a while, the forecast cones of Marco and what would become Hurricane Laura crossed, something meteorologists at weather.com couldn't remember happening before.

Marco (man) was hit by a strong wind (the move in the spirit) shortly after reaching full hurricane status, then dwindled and died down to almost nothing before coming to shore on the 24th of August. Many forecasters think it was affected by Laura (God’s plan for victory)! When Marco landed, it brought mostly rain. The Holy Spirit is depicted as Rain upon men…

While Marco weakened, Laura got stronger as it came toward land rising in record-breaking speed to a Category 4 - four is the number of God’s creative works. It came to shore in Cameron, Louisiana on the 27th: three days after Marco. Three is the number of perfection and completion in the Spirit. This created a swath of storm surge affecting Texas as well. Here is what the National Weather Service said about the storm on Twitter:

An “unsurvivable storm surge” was predicted.  The surge was not as bad as forecasted. As promised in the message He sent, God mitigated the waves so the loss of life was lessened. Even though this storm has broken many records, the loss of life has not been as high as other hurricanes.

Despite the diminished surge, “Laura goes into the history books as one of the most brutal hurricanes of all time…” reported the Tallahassee Democrat paper. The wind was much greater and stronger than any storm in the last 100 years. According to CNBC news:

The wind represents the Holy Spirit. Air is the spirit realm, a strong wind is a strong move in the spirit. 150 is the end of judgment by water, this is why the winds were high and the water wasn’t as bad as foretasted. 110 is a generation and operating in your calling. In other words, God is bringing correction through the spirit to a generation that is operating in its official calling.

This landfall was nearest to Cameron then headed straight toward the city of Lake Charles,  remaining at a Category 2 hurricane, causing immense damage.

Laura was “catastrophic” for Lake Charles. There is a ferrous spiritual battle coming toward the army of God who have not used wise discernment about His ways. Many died to trees falling due to the high winds. The top of the 105-year-old South's Defenders Monument outside of a courthouse in downtown Lake Charles was knocked off its base. 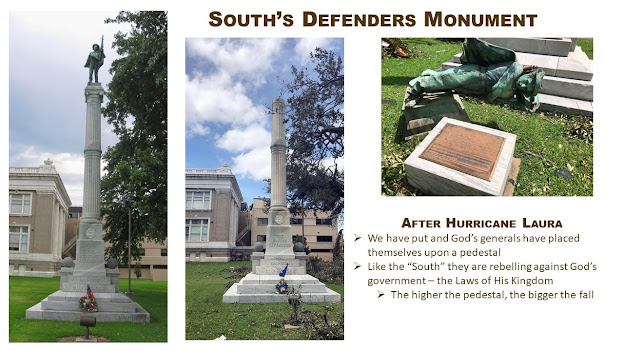 God’s generals and the fathers of the faith, especially those who have grown rich by rebelling against God’s ways, have not used discernment to turn back from selling what doesn’t belong to them, will be removed from their positions, just as the statue was. Some people may also be damaged by their removal. You need to move far away from the leaders not operating under the principles of Matthew 10:8-10 to avoid being damaged when they fall! 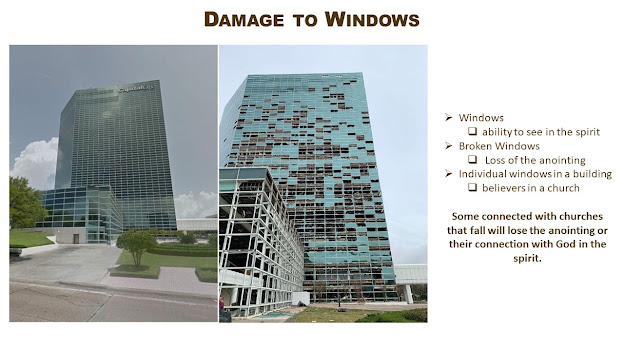 The path of this storm proves this is what God is saying: it traveled right through the Bible Belt of America. 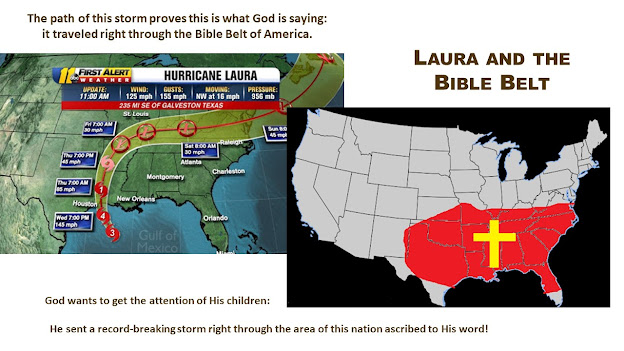 God wants to get the attention of His children: He sent a record-breaking storm right through the area of this nation ascribed to His word! The Body of Christ needs to cinch down the Belt of Truth about who God is and what He expects of us.

In a previous message the Lord command it be said: Thus sayeth the Lord:

“Those who have perverted My way and given birth to another church, will be removed. Those who are following what they have been taught will have a chance to repent.”

There may be many results as this takes place:

If any of these happen in your life, do not fear. You are still loved by the Lord, He has a special place for you in His heart. Jesus reassured me that He will still be ministering to those receiving correction. There will be dreams at night. He will speak to you at work.

The Lord asked me to create a special “Leaders, Teachers, and Intercessors” course at the Courts of Heaven Academy. This is a “short cut” to the items that bring an attack upon those leading or interceding for others. He would like to see you set free sooner rather than later!

This is not a “shorter version” of the CoH Academy. We knew from the word the Lord brought forth that when the anointing is lost, it takes time and effort for it to be recovered. The remaining classes in the Academy will bring you much more from the Lord. However, as someone leading the charge against the enemy who has come under an attack, we want to see you set free so that you can continue learning.

If you have been in a leadership or intercession position in the Body of Christ and are under an attack, please message us at CoHvisit@gmail.com and let us know so that you can have the password to the Leaders, Teachers, Intercessors course!