I often hear from the Lord through my online stats. Without doing anything new, downloads of my book or website hits, will suddenly shoot through the roof when the Lord brings me a new revelation. I looked at the Amazon Kindle downloads for my free books and instantly knew God was saying something.

I had two spikes in downloads in the last month: when the second spike was twice the size of the first, I knew God was pointing something out. Here is when they happened: 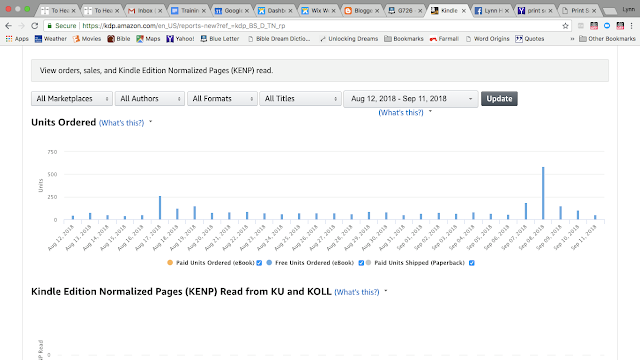 The day after I returned home from Dalton, Georgia where I had confirmed the miracle of the Oil Flowing from the Bible, 262 people downloaded my books: normally it is 20-30.

The day I spoke with a team member on the phone and the Holy Spirit moved to reveal the second half of the revelation from God about the oil, 583 people downloaded my books.

I was shocked that the dates of a miraculous jump in downloads correlated to the days I received revelations from God! There are two parts to the Miraculous Oil Flowing from a Bible. I hope you have read both. If not, here are the links:

The Bible Flowing With Oil - Many Have MISSED the POINT

The Awakening & the Feast of Trumpets

Signs, Wonders, Miracles, Angelic Encounters, and Heavenly Visits
can be found in the
HEAVENLY ENCOUNTERS
tab in the menu at the top.