Around noon my cell phone rings. “Craig Johnson,” I think, “it must be important if he is calling on a Monday after returning from a vacation.”

This is the same Craig from Angels Believe in You who showed up at my office when I asked God for help with my accounting. 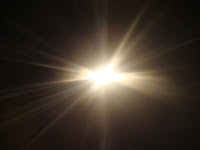 “Tiring: 1,400 miles in four days was fun but exhausting!” He tells me, “Something really weird happened a few nights ago. In the middle of the night I woke thinking I heard my son awake in the next room of our motor home. All of the sudden, there was a bright light in the bathroom, just down the hall from where I was. It was so bright, so white, it really frightened me. Then a voice came out of the light. It said, ‘Lynn.’ I thought perhaps it was looking for you so I said, ‘She’s not here right now.’ After that it went away. Lynn, what the heck was that?”

“Hmmm…,” I think back to what happened on those days, “three nights ago that would have been Friday, right?”

“We were traveling,” he admits, “so it could have been four days, Thursday or Friday. I wanted to call you right away but I didn’t want my wife to find out about it; she would think I’m crazy.”

“Nothing appeared to me on those days.” The Holy Spirit reminds me of a prayer I prayed, “But a week before that was when God called me as His prophet . I hate to admit it, but that was a LOT to accept. I struggled for a bit: Why would God call me? I prayed ‘Lord, they are all expecting Your glory, but they are not expecting Your prophet. You said that this was the year, and this year is mostly gone. It would really help if you would say my name to someone to verify that I am what you say I am and it is all coming about in the next few months.” A bark of laughter escapes me. “It looks like He did exactly what I asked. He said my name to someone – He chose you.”

Craig explodes, “No way! Lynn, that is so amazing!”

I shout, “Praise God! I’m His prophet!” After I jump around the room for a few minutes, I think about what Craig has said. “Remember that almost every time an angel appeared in the Bible they said ‘fear not.’ They come from the presence of God and carry it with them and people tremble when they appear. God’s presence is so awe-inspiring that is what the ‘fear God’ means in the Bible. He is so massive that we know how small we are compared to Him.”

Craig agrees, “Yes, they do say that! And that is exactly what I felt; what I was seeing was so awesome it made me feel small and insignificant. Not frightening fear, but awe-fear.”

Our conversation ended soon after: Craig had dashed into an empty room to call me and someone was entering. The next day, I sent this story to him and asked if he had asked God to verify the things I had been telling him. He replied:

I wasn't asking for anything. It may sound weird, but I was/am just happy to be moving along as-is. This was something like I've never experienced before; the whole thing- from light to immense fear to hearing your name to trying to go back to sleep to calling you and discussing. My logical brain is at war…

You will be happy to know that angels rarely appear more than once to a single person... you should be in the clear of supernatural stuff unless it is a matter of life and death.

There is a difference in knowing about God and believing in Him and actually experiencing Him. It is like knowing about the ocean, but never seeing how endless it is, how unstoppable the waves are. It is akin to the difference between seeing pictures of the Grand Canyon and standing on the rim of it.

Angels bring a piece of His presence with them. So in a way, you have been in His presence – you actually know how powerful and immense He is. You can now say that you truly “fear” God.

Craig kindly said he would allow me to share his story and quote him for this book. I am grateful to him for standing beside me even when things look pretty crazy. Even though I had come to terms with the calling, this completely authenticated that God has spoken.