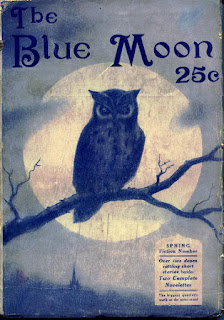 Hebrew Calendar
God’s people count a day as ending and beginning at sunset. So dinner, which usually occurred after sunset, is the first meal of the day.

Taking this into account, when the blue moon occurs on March 31, 2018, it will be the second half of the first day of the feast of Passover. Jesus was crucified at about 9 AM on the first day of Passover - the blue moon will rise in Florida at 8:36 AM? on that day. The fact that this event is occurring on the very day our Lord was crucified is filled with meaning! The Bible tells us the last days will be filled with signs in the Heavens. This is one of them!

What does it mean:

-- Blue is a symbol of revelation and communion with God.
-- The Passover Feast last seven days
-- It is a time when “leaven”, symbolic of sin, is removed from God’s people.
-- This is the 2nd blue moon on a Hebrew Feast

In the Bible, days often represent years. For the next seven years, God is asking His people to leave sin behind and seek deeper communion with Him. Jesus is calling His people to meet with Him in the Secret Place of the Most High - a deeply intimate communion with Him. How do you get to this place of communion? This blog has several stories on this topic. The Believer’s Boot Camp series (free on Amazon) is a revelation from God designed for this very purpose.

The first blue moon occurred the feast of "Rosh HaShanah La'Ilanot (Hebrew: ראש השנה לאילנות‎), literally means "New Year of the Trees." (Read that post, click here) The combination of the blue and super blood moon on this holiday brought a depth of meaning to what God is doing.According to the Bible, with witnesses a thing shall be confirmed. This is the second witness; communion and relationship with the Father, Son, and Holy Spirit is what God desires for us in this time. There was no super blood moon, but we have something much better, it is occurring when He actually shed His blood!

Don't wait, begin the journey now! I t is time to remove the leaven from your life and grow in your relationship and communtion with God through the revelation He has brought to the Body of Christ!