In America, on the morning of January 31, 2018, a blood moon occurred during a blue moon. This is an incredibly rare event and has been recorded in all the record books, though perhaps to the chagrin of some astronomers.
A Lunar eclipse is what we refer to as a blood moon when the moon passes into Earth's shadow during a super-moon when the moon's perigee — its closest approach to Earth in a single orbit — coincides with a full moon turning it a red color.

The second full moon which occurs in the same month has been "mistakenly" referred to as a blue moon since 1946. The term has traditionally referred to an "extra" full moon, where a year that normally has 12 full moons has 13 instead. The "blue moon" reference almost applied to the third full moon in a season with four full moons. There are several coincidences surrounding this "blue moon" mistake:
Now, journalists both on the internet and in newsrooms and newspapers across the country are announcing the second moon on January 31, 2018 as a "blue moon." This is the first super blue blood moon visible in America since 1866 which is the year Elizabeth Cady Stanton and Susan B. Anthony formed the American Equal Rights Association, an organization for white and black women and men dedicated to the goal of universal suffrage.

When you take into account the time difference, this event actually occurred on the Jewish holiday, Tu Bishvat. It was originally called "Rosh HaShanah La'Ilanot" (Hebrew: ראש השנה לאילנות‎), literally "New Year of the Trees." The Bible is clear, God gives signs in the heavens, so when a blood moon occurs on a Jewish holiday, it is definitely something we should look at! What could this rare even signify? There are three aspects we should examine: Hebrew roots, Biblical spiritual meaning and the Biblical physical meaning.

These are typical Hebrew beliefs about this minor holiday:
Although this day is Rosh Hashanah for trees, Isreal attaches a special significance to this holiday because in scripture, man is [compared to] the tree of the field (Deuteronomy 20:19). Through cultivating strong roots – faith and commitment to God – we produce many fruits— according to the Torah and Mitzvot.
For many Jewish people, the New Year of the Trees marks man's awakening to life, the awakening of a person to achieve the purpose of life.
In essence, man is a tree and the Jewish holiday celebrates the awakening to achieve your God-designed destiny. If you have been following my posts about the other lunar events of this year, there was one posted about the American Solar Eclipse on September 23, 2017. God said it marked that the “Awakening” had begun. (Click here to read that post). But this is only the beginning of what God is saying with this show in the heavens.

Traditional Christian meaning of fruit is:

You will know them by their fruits. Do men gather grapes from thorn bushes or figs from thistles? Even so, every good tree bears good fruit, but a bad tree bears bad fruit. (Matthew 7:16-17)

But the fruit of the [Holy] Spirit [the work which His presence within accomplishes] is love, joy (gladness), peace, patience (an even temper, forbearance), kindness, goodness (benevolence), faithfulness, gentleness (meekness, humility), self-control (self-restraint, continence). (Galatians 5:22-23)

Then God blessed Noah and his sons and told them, "Be fruitful and multiply. Fill the earth. (Genesis 9:1)

When we grow closer to God, our character begins to reflect His ways. The Bible refers to this as “fruit of the Spirit.” As the Holy Spirit is given more room in your life, He shows through us more as our actions reflect God inside us. According to scripture, being fruitful also means being prosperous.

Now let us add the blue and blood moon to these meanings. The Biblical meaning of blue is revelation and communion with God. Christians come into right relationship with God through the blood of Jesus, which is represented by the color red. The color red also means wisdom, anointing, and power.

What the super blue blood moon means in a nutshell:

We have entered the Awakening. God has granted us wisdom which brought a revelation about how men (trees) can come into a closer communion (relationship) with Him. This will bring a greater anointing and power with financial prosperity for His people. It will be marked by the role women will play in this movement of God.

In Hebrew, there is no word for coincidence. Everything that repeats itself or seems linked is a message from the spirit realm, either for evil or good. I mention this next item because of this:

I was strongly led to attend a worship meeting at our church last Sunday. There were artists who were painting as God inspired them. This is one of those paintings. 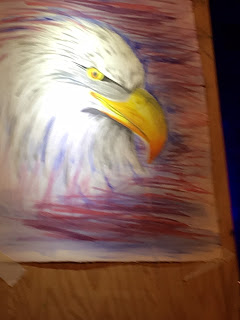 We were asked to come forward to an open mike if the Holy Spirit impressed anything upon us. I stepped forward, “Hello, I was speaking to the artist who painted the eagle; he insisted I come and speak here about what the Holy Spirit was revealing about his painting. An eagle is a prophet; that is just what the Bible says an eagle means. It is painted on a background of red and blue. Red is wisdom, power, and anointing. Blue is relationship and communion with God. In this time, God is rising up a prophet who will bring a revelation about a deeper relationship and communion with God. Notice the red on the tip of the beak? This prophet will speak with wisdom that touches our minds and brings hope (yellow). The black line through the eagle's eyes indicates that this prophet will see the mysteries of God (what black means).”

Notice the background is blue and red like the names for the moon which would appear three days later. It is the prophet that this painting spoke of who will reveal the mystery of God in His word about our relationship and communion with Him.

It is perfectly clear that the revelation of the Trinity meeting with us in Secret Place is the deeper communion. The free book “Roadmap to Heaven” is only one of many books released about visiting Heaven in this way.  This is an awesome time to be a part of the Body of Christ. The way is open, it is time to begin the journey!


More articles about the "Awakening" can be found in:

Awakening
tab in the menu.