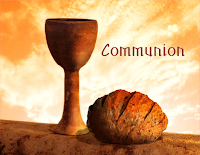 "And he took bread and gave thanks and broke it, and gave it to them and said, 'This is my body, which is given for your sake; this do in remembrance of me" (Luke 22:19)

This was the Afikomen; not just any piece of matzah, but the piece which was broken and hidden at the start of the Seder, wrapped in cloth and placed in a bag. This is symbolic of the exodus where the Israelites left in such a hurry that they took the unleavened bread and wrapped it in their clothing, carrying upon their shoulders.

Christ took this UNLEAVENED bread, signifying the sinlessness of Messiah and used it for this ceremony. But there is another layer of meaning. It is custom in many Jewish households to have the children find it and then return it only in lieu of a promised gift. This custom is based on a statement in the Talmud: “We snatch matzahs on the night of Passover in order that the children should not fall asleep.” (Talmud, Pesachim 109a)

In other words, the game of hiding the afikoman and the accompanying bargaining for a gift is an activity to engage the kids and make sure that they don’t fall asleep during what is invariably a long evening. The communion is meant for the children of God to remember and stay aware as to not fall asleep before Jesus’ return as demonstrated in the tale of the 10 virgins, some of whom fell asleep.

This is the fuller meaning of the bread:
The bread says so much. What does the wine say?

And in like manner, He took the cup after supper, saying, This cup is the new testament or covenant [ratified] in My blood, which is shed (poured out) for you. (Luke 22:20)

During Passover there are four glasses of wine drunk as four blessings from God are pronounced. These had been consumed because the Jesus took the cup “after supper.” Since the cups had all been drained, which wine did Jesus use?

There is a fifth cup poured at supper which is poured but not used; Elijah’s cup. The name comes from the fact that they are waiting on Elijah to reveal the Lord. Instead of drinking this one, the fifth cup by contrast, is poured out while the Great Hallel is recited over it. (Pesachim 118a) This long recital is Psalms 113–118, declaring so many of the promises of God.

This is the fuller meaning of the wine:

Though it began on Passover, Communion is something that should be done “often in remembrance” of what Jesus has done. How can there possibly be dangers in this? There are two big ones:

Therefore whoever eats this bread or drinks this cup of the Lord in an unworthy manner will be guilty of the body and blood of the Lord. But let a man examine himself, and so let him eat of the bread and drink of the cup. For he who eats and drinks in an unworthy manner eats and drinks judgement to himself, not discerning the Lord’s body. For this reason many are weak and sick among you, and many sleep (die). For if we would judge ourselves, we would not be judged. (1 Corinthians 11:27-31)

Taking the bread and wine, we must not only know fully what it means, but also judge ourselves or it will bring judgment upon us. What judgement? Weakness, sickness and death! The message of “hyper grace” is not Biblical. Jesus died and accepting Him as Lord gets us into Heaven, but judgement was and is still coming from the throne! Why? Because we don’t apply the bread and blood to our daily lives AND judge what is sin and needs to be left behind and what is good and right.

To overcome this danger, learn about the Courts of Heaven, about the fullness of what Jesus has done. Also, begin examining yourself. Remove the leaven (sin) from your life as the tradition of Passover instructs God’s people to do..

A “closed-table” communion is any communion in which you must be an approved member in good standing of a church to receive communion. By handling communion in this way, the church is saying:
You are stating:
In essence, you are placing this church as a spiritual barrier between you and the Lord. The purpose of Jesus' coming was that He is our High Priest. There is no longer a barrier between us and God. Doing this is not what Jesus wanted.

This danger isn’t limited to communion. Some preachers ask you to be in “covenant” with them or “partners.” This means you are becoming “yoked” with them. Many tout this as entitling you to the same blessings; financial and healing, that they walk in. If this is so, then you are also taking upon yourselves any penalties for disobedience or rebellion they are standing in.

To overcome this danger, don’t take “closed-table” communion. Your standing with God is your business, between you and Him. Don’t allow a man to pass judgement on that. Don't give man this spiritual power over you.

To avoid being labeled “guilty by association,” don’t “partner” and especially become a “covenant partner” with anyone. The Holy Spirit and Jesus are our partners, not man.

I’m not saying don’t sow into ministries. When you receive a revelation message from God, His word tells us to acknowledge that by giving back to support the person who brought it, (it should be given for free), but that doesn’t mean we should be “partners” with them unless it is for a specific project with an end goal in mind.

This Passover, let us read Psalms 113-118 and remember what God has done for us!