Fruit from a Tree in Heaven

The next time I visit with the Lord, I began by dancing with Jesus as I have done many times when I worship. The second song I found myself at the river with Abba (Father God) and Jesus: I ran and jumped into Daddy’s arms, letting Him know how much I missed Him. He sat me on the ground and told me to go play. 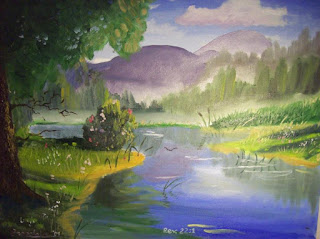 Darting forward, I splashed through the shallow stream, toward the Holy Spirit. My Friend ran from me and we chased each other around for a bit in a game of tag. The vision began to become clear and distinct as the child-sized member of the Trinity dashed to a tree and began climbing; I was right on his heels.

Fruit was visible high up in the upper branches. The Holy Spirit grabbed one and handed it to me. It was bright red like an apple, but shaped like a peach. He gave a nod when I looked at Him, wondering if I could eat it.

Though I didn’t taste the fruit as I hoped, an odd sensation accompanied the eating of it. The 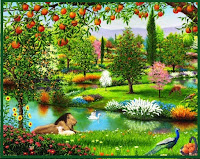 bottom half of my face around my mouth and my jaw tingled with a heaviness I often feel on my hands or legs when I pray. As I swallowed each bite, pressure built right where my ribs meet; the place our spirit resides.

After finishing the first piece of fruit, the Holy Spirit handed me a second piece saying with a smile, “You need to pray in the Heavenly Language more.” I continued eating each piece of fruit He handed me for quite a while! The vision became clearer and clearer as I ate. Soon I could see birds flying in the bright blue sky and details of the river I had never seen before. I could make out every aspect of Jesus and my Father who were standing in the river watching this with fondness.

This is what visits to the Secret Place are all about. It is correction from God but as "Daddy" not Judge. It is gentle, kind, and even fun! I think this is good advice for all Christians. The Apostle Paul said, “I thank God that I speak in [strange] tongues (languages) more than any of you or all of you put together;” (1 Corinthians 14:18 AMPC) and we also know that it edifies or builds up our spirit man. (1 Corinthians 14:4)


Signs, Wonders, Miracles, Dreams, Angelic Encounters, and Heavenly Visits
can be found in the
HEAVENLY ENCOUNTERS
tab in the menu at the top.