I slide into the chair, picking at my favorite selection of salad from the unlimited buffet. “Are you feeling okay?” Tony asks.

“Just a little tired.” I hesitate briefly before continuing. “I was talking to the Lord until after 1 A.M. last night.”

“But you said you came away rested after you meditated?” He asks. “Why are you so tired?”

“It wasn’t meditating, it was more active, like talking,” I sigh. “Maybe you can help me with it. I can’t seem to stop thinking about it today.”

He nods, seeming interested in the conversation. I can’t believe this is the same man who wanted to throw out my family Bible because I never read it. “I have been trying to be more diligent in what the Lord told me to do. He said, ‘practice.’ For the last few weeks I have tried to meditate and pray more often, at least three times every week, but I keep hitting a wall. My thoughts are scattered – it’s hard to stay focused. The presence of the Lord is so light, it’s hardly there!
“Last night I had one of ‘those’ conversations with the Lord.” Tony smiles briefly, knowing what “those” talks are like with me. “I asked Him, ‘Lord, are we doing this Heaven thing or not? I’ve been trying to do what you said, but it seems to be getting harder, not easier! If going to Heaven like You did in meditation isn’t what you want of me, just let me know. I’ve been staying in bed in the mornings to meditate and taking breaks at lunch, just to try and meditate. If this isn’t where we are going, I don’t want to waste my time. I’ve got a lot of other stuff I could be doing.’ ”

Tony nods in agreement, “Did you get an answer?”

“Sort of, I guess.” I shrug. “I was kind of hoping you could help figure that part out. I was lying on my stomach with one hand under my body and the other above my head. Before I even got to the last part of my rant, my hands began to tingle something fierce; like when He is calling me to meditate. He hasn’t done that except on a couple of nights when I had a big day ahead of me the next morning, nights when I didn’t have time to meditate.”

I sigh with frustration. “Here I am asking Him for some clarification and now He is calling me to meditate! I said, ‘Okay, fine… I’ll try it again.’” 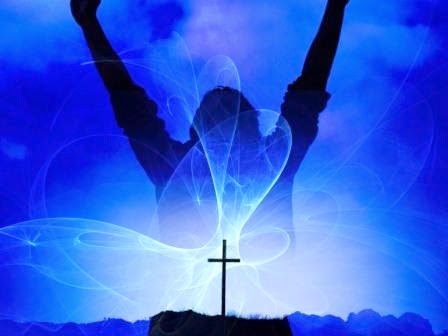 Tony chuckles at me, I assume because of my mild temper tantrum. I glare back at my husband. “I know, but I couldn’t help it. You know how I get when I’m frustrated,” I insist. “So I rolled over and put my tingling hands on my stomach like I always do. A few deep breaths helped release my irritation and frustration as I focused on what God had given us when He made His Son into a mere man. I effortlessly pushed all other thoughts from my mind and began worshiping the Father, Son, and Holy Spirit.

“Tony, it was as easy as breathing. His presence fell quickly. The intensity of the waves of energy increased steadily. Soon they were coming and completely enveloping me as I thought ‘Jesus’… then another wave as I thought ‘I praise you’… I couldn’t even get to the part about going to Heaven, I just kept with that. The energy built until my hands felt like they were not even there anymore. My body heated up, it felt like it was on fire! Though it felt like I had a temperature of 105, I wasn’t sweating. I wanted to kick off the covers, but I remained completely relaxed. Then slowly, the energy began to ebb. As the energy drained, and I became more aware of my body, I noticed that my stomach was tired, like I’d done a hundred crunches.”

“Did He speak to you in that meditation?” Tony asks. “Did you get an answer?”

I shake my head. “I was so exhausted that I fell asleep before I realized that I didn’t. This morning I told Him; Lord, I’m not sure I understand Your answer, if You gave one. What exactly did you mean? Do I need to practice because it can be taxing on my body? Do I need to meditate and pray only when You call with the tingling?” I turned to my husband, “What do you think? Did I get my answer?”

Tony huffs. “You always say that nothing is impossible for God. Couldn’t He just take you right now, today, and then when you return to your body He could heal it? For that matter, why didn’t He just answer you?” His brow furrows.

“I suppose He could, but I have been asking to go to Heaven as Jesus did. Maybe to do it that way I need to be stronger.” I recall another time when God told me not to do something and I didn’t understand why. As it turned out, my muscles weren’t strong enough so I tore my rotator cuff.

Tony sits back, looking really perturbed. “Maybe, but you asked Him something. Why didn’t He just answer you? If He just said, ‘I am here,’ just once, when people prayed, then their faith would dramatically increase because they would really know that He is listening!”

I smile. How often I’ve heard that from people who are desperate to hear God’s voice. “I don’t think God works that way. That wouldn’t be faith. Faith is believing in what you can’t see or feel.”

Tony frowns. “Easy for you to say. You actually heard the voice of God. He spoke to you. You couldn’t possibly have really known that He was listening! I mean really known.”

“But I did! It was back when we were fighting quite a bit. I was at home with Ashley, way out in the country. Jesus became a real, live, person to me as I began to read Matthew, Mark, Luke, and John in the New Testament. I hate to tell you this, but I was cheating on you. Jesus became so very real that I couldn’t wait to go to bed at night and talk to Him – I was absolutely in love with Him. He was my world. It was only then that He spoke to me.”

“It would be so much simpler if He would just speak to people when they asked!” insists Tony, who always knows the easiest way to do things.

“I’ve been waiting. He’s been pretty silent,” Tony tells me.

I ask the same question I’ve asked my husband a couple of different times. “The next time God calls me to pray, would you like to join me? If you hold my hand, perhaps God will let you feel His presence the way I do.”

In the past his reply has been first, “No,” then “I don’t think I’m ready for that yet.” This time Tony says, “Wouldn’t that be forcing God’s hand?”

I shake my head. “I prefer to look at it as pursuing Him in faith. You are seeking a closer connection with Him. So do you want to try it?”

Wow, the change God has made in my husband over the last thirteen years is amazing! “Then the next time you are still awake when He calls, I will let you know.”

My sister flies into town late that night. I waste no time explaining what happened with Tony. “We got a little sidetracked. I’m still not 100% sure what God was trying to tell me.”

“I think you’re right. God wants you to practice when He calls you.” She agrees with my initial instinct.

“Man, I was really hoping I was wrong!”

“So you wanted to go to Heaven when you wanted? Not when God wants you to?” My sister doesn’t sugar coat anything. “That is a little arrogant, don’t you think?”
“It’s not like that. You have no idea what God is asking of me!”

She looks skeptical. “You wake rested from meditation, what’s the problem?”
“If I have caffeine I can’t sleep,” I explain, “so I have to take an over-the-counter P.M. sleep aid. If I don’t go to sleep in 30 minutes it makes my stomach sick. So this means for as long as it takes I can’t have a coffee if I get a craving, or a sip of soda in a restaurant after dinner, or even a couple of glasses of wine with dinner!”
She huffs, “Are you seriously whining about having to give up caffeine and a drink, what, once ever month or so? It’s no worse than being pregnant. You have to give that stuff up then…”

“Dang it!” I slap my sister on her shoulder. “You just had to say that! Now I know beyond a shadow of a doubt that it’s what God expects. I’ve been talking to God a lot about how when He told Abraham that he would have a son within a year. I asked if this was like that. Would I be pregnant with this for a year? Now I know it is God’s answer!”

“You’re asking God to take you to visit Heaven like Jesus did. That is not a normal request. You should expect it would require some dedication.”

I take a deep breath, the matter settled in my heart once and for all. “I suppose you’re right. It’s not so much to ask. I was just hoping it would be easier than that.”


My sister shrugs, “Few things worth having are ever easy.”