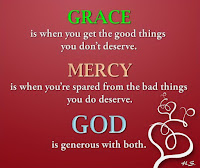 The courts are not taken seriously - the petitioner doesn’t really see themselves as before the Judge so they shrug off whatever happens.
In these instances, the backlash, or attacks are not necessarily a bad thing. It helps us to realize that more needs to be done. However, there were people coming under attack before they could return to deal with their charges. This didn’t seem fair or just so I asked the Lord why this was happening. Several days later I received the answer.

A petitioner, let’s call her Beverly, sent me a message. She was under attack; thoughts of worthlessness assaulted her; the voices claimed that her sin was so bad and she was no longer of any use to God. This is one of the worst lies Satan tells. I messaged her back:

It is the enemy who is bringing the condemnation - that is a spirit talking to you. The Holy Spirit brings correction. All we have to do is say, yes, I see how I was wrong and I'm going to correct my path and do it right. Jesus has done the rest. When you admit you are wrong and are determined in your heart to correct it, then the blood covers it and wipes it out like it never happened.

Remember: Your worth comes from Jesus. Every one of us, me included, are covered in filthy rags until Jesus redeems us. He redeems us all the same - God sees both you and I the same; as pure and perfect as Jesus. The Court is our chance to correct what the enemy is saying about us!

By claiming we are not worthy, we are saying that we are so bad that the blood Jesus shed is not enough to take care of our sin. Are your mistakes greater than the blood of Jesus? Even those who tortured Him would have been forgiven if they had asked: what is against you is pale in comparison.

The next morning I received another message from Beverly:

She had cried most of the previous day. This morning in the shower it was even worse. As thoughts assaulted her she said, “"No! I’m not going to listen to you today!”  Then she cried out, “Jesus Jesus Jesus,” hoping He’d help.

Suddenly, something shook through her body. It literally boomed and moved & jarred her. Suddenly, it occurred to her it was like a gavel striking down in Court by a Judge with tremendous force.

A voice said, "The Lord himself has taken up your case."

The Lord declared, "ENOUGH! From now on you will receive favor wherever you go. You will be given promotions you don't deserve.”

This was the answer to our prayer! The definition of grace is unmerited, undeserved favor. The Lord was intervening for Beverly.

Her experience explains why everyone was seeing relief from the backlash: We pray, but if the spirit has had a place in you life for a while, you need to call upon the Lord to receive that grace! If you come under attack before you have a chance to respond to charges, cry out to the Lord and He will grant you mercy.

When the Lord is taking up your case, God’s grace and mercy should not be taken for granted. This doesn't mean all charges should be ignored. It means that the Lord is getting the enemy off your back for a time so that you can grow in the things of God. It is for a purpose: so you can seek the meaning of the charges with the Holy Spirit. This should allow you leave that sin behind (repent) because it is giving the enemy access to you. If you continue in the sin that brought the charges, the enemy will return and ask to redouble his assault upon you.

Be not deceived, God is not mocked; for whatsoever a man soweth, that shall he also reap. (Galatians 6:7)

This verse is usually applied to sowing material seed because the previous verse speaks about supporting those who are teaching you God’s ways. However, this verse reveals a charistic of God: He will not be mocked - in other words He expects you to respond in His ways. So if you know that sin gave the enemy a chance to place charges upon you, then when you receive grace from Him you should come out of that sin.

Think of it like this: God is giving credit for coming out of sin before you actually do turn from it. If you fail to turn from that sin, God will not be mocked - there will be consequences for not doing it God’s way.

This is why we see people lose their healing. The Lord intervened in the Courts of Heaven, clearing charges for their healing because they called upon His name, however when they kept committing that sin, Satan was allowed to place the infirmity back upon them.

What should have happened is this: After the person was healed, they should have rejoiced in the healing and sought a deeper relationship with God through the Holy Spirit. Our teacher could have then revealed where they needed to correct their path. If you have been to the Courts, you know how easy it is to have little things in your life that you need to turn from. It can be nearly impossible to see without help. This is why the Bible states:

Notice it says that we will receive backlash - chastening - if we do not judge ourselves! The message is the oldest one in the New Testament: Repent - turn from your ways and turn back to God! We are here to help you find where you have gone astray when you need us. That is why God calls us the “body” of Christ. We need to work and function together!

Here is the Tea & Coffee meeting on the topic:

Here is a link to some scripture you can use as daily prayers over yourself to minister to your spirit: