It is About Balance... 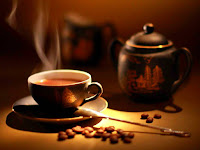 I was having trouble sleeping at night, so I decided I'd give up coffee one Tuesday morning to see if that would help. By noon, a caffeine headache was blooming and I had the Agape Fellowship meeting in less than an hour.

Laying on the couch, praying, I asked the Lord, "Take this headache away if you don't want me drinking that cup of coffee that's brewing during the meeting. Otherwise I have no choice!" The pain building behind my temples left.

Slightly bummed at thinking I would have to give up my morning cup of coffee, I began the meeting. During the opening time of worship I met the Lord in the Secret Place. We danced together as is our custom.
After a few turns, the Lord stepped back and we began this odd kind of dance where I shadowed what I saw Him doing. I instinctually knew to follow Him. The progression in the Secret place dances with the Lord were clear:
As the song ended, the Lord drew me close. "I've missed this," I whispered.
"You can come anytime," He whispered back, "It wasn't about the coffee."

The song ended as He gave the mild rebuke and I found myself in the river with God as Abba or Daddy. I leapt into His arms, "Daddy, Daddy, I'm so glad to be here!"

"I'm glad to see you." After a brief hug, He set me on the ground. He pointed up stream where I usually go to play with the Holy Spirit. In a louder and gruff voice, He said, "Now Go!"

Unsure of what to think, I stumbled forward. Abba had never been gruff with me before. I searched for the Holy Spirit, my child-sized friend, but He was nowhere in sight. "Holy Spirit, where are you my Friend," I called out. He poked out He head from the branches in one of the trees and tossed me a piece of fruit. My spirit expanded as I gobbled down the Heavenly treat.

"No more cheating!" He said, "You know what you need to do..." On an earlier trip, where I discovered the benefit of eating Heavenly fruit, He had told me to pray in the Spirit more... Sheepishly, I ducked my head. Looks like the entire Trinity was irritated with me, even my Friend.

As I ate fruit, thoughts crystalized in my mind. It wasn't about the coffee. It was about balance.

I had been so focused on the ministry that I wasn't taking time to drink water during the day, I wasn't exercising, I wasn't spending enough time with God. My life was out of balance and the result was the inability to sleep. I announced this in the group meeting because the Lord said this message was for more than just me.

Our team meeting always follows the fellowship meeting. Turns out one of our team members had been struggling with sleeping as well. She had just given up coffee. Now she knew it wasn't about the coffee... it is about balance!